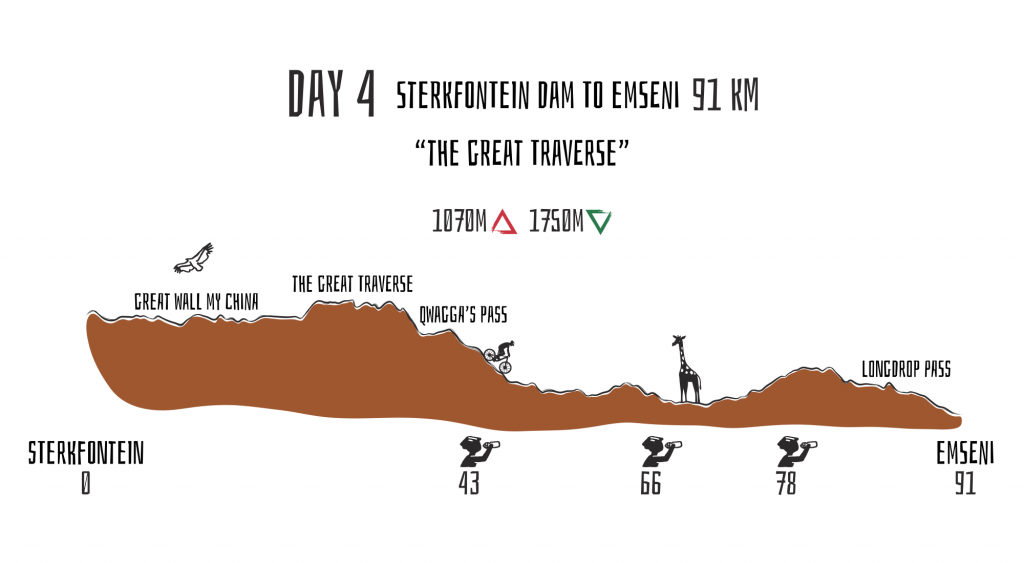 After riding this day on the dry run we really think you will be blown away by the new trail on top of the world now known as the Great Traverse. It is a special day.

Sterkfontein Dam is massive. As you leave this vast expanse of water you should have a little excitement running loose in your veins – day 4 is known to produce a few endorphins. You may have heard about the big drop into KwaZulu-Natal off the escarpment. But first you will have to get there. The early morning chill will soon disappear as you feel the heat in your legs on your way to the edge of the world.

On your left is Retief’s Klip where the Vootrekkers hung out for their single-track horse rides and scouting missions. There is a very distinct possibility that you will be riding over the same trail that Piet Retief’s horse chewed up on an out-ride. Who is Piet Retief? Ride on.

The first 25km is beautiful but tough, and then the riding is just magnificent. You will literally feel like you are on the edge of the world. For 8km, including the top of Great Wall My China, on to the Great Traverse and down Qwagga’s pass you will understand why you own a mountain bike and why you ride.

Keep your shoulders relaxed, don’t tense up and let the bike do the work. You will see the best views of Kwazulu-Natal while riding on the edge of the Free State. We have built a new trail that allows you to fully enjoy the descent – Qwagga’s Take it easy. Ox-wagon once took hours, if not days, to get down.

Water Point 1 hosted by Harrismith Rotary Club is at the 43km mark. Due to the nature of the terrain, we decided to make this Water Point at the bottom of the mountain rather than re-enact the Voortrekker movement to set it up the top of the mountain.

Once you are at the bottom you will have some fast sections of dirt road until you enter farms again. The trails through the farmlands on cattle paths are fast and fun.

The next 60km until water point 2 will fly by. At the 78km mark, at water point 3, you will meet the people of the Philahathle Well-Being Centre. Make sure you take lots in because the proper riding is still to come. After your refuel stop you will ride on some proper bush single track all the way to Bone Rattler – a gnarly little descent that works suspension and then into more bush trails that are breathtaking.

This is Berg and Bush territory and Farmer Gary’s event is not a sell-out for nothing. After bone rattler we have a bonus water point just to give you enough voomer to get you home. Before you get to Long Drop Pass you will have some breathtaking bush single track to keep you motor-vated.

We have taken out Spionkop and replaced it with great riding – why? Because we can and we know what it best for you. Another major highlight will be the trail from Long Drop to base camp. Rob Dormehl from the Garden Route Trail Park was hired to create a little section that should blow your mind.

The last 20kms is single track heaven as you decent into Emseni at pace in time for a cold beer. Day 4 has everything any passionate mountain biker could want. Farmer Gary and his team have put on a feast of riding. We hope you savour every kilometre.

The Winterton Primary School will be your hosts at Emseni. They know how to put on a good spread.